Approximately 1.5 million to 2 million criminal cases are dealt with and go through the Magistrates Courts each year.

Motoring offences or disorderly behaviour, are dealt with only by Magistrates' Courts. These are commonly referred to as summary offences and carry a maximum punishment of six months in prison, and/or a fine of up to £5,000.

As illustrated above, a lot of cases are dealt with each year through the criminal justice system. A real point of consideration now arises from the Prosecution of Offences Act 1985 (Criminal Courts Charge) Regulations 2015, which introduced a charge that applies to all adult offenders dealt with for offences committed on or after 13 April 2015 except where the offender is sentenced to an absolute discharge or a hospital or guardianship order. It is separate from other financial orders that the court may make such as compensation, a fine or prosecution costs.

In addition to the Victim Surcharge the court must order the charge set out in the table below: 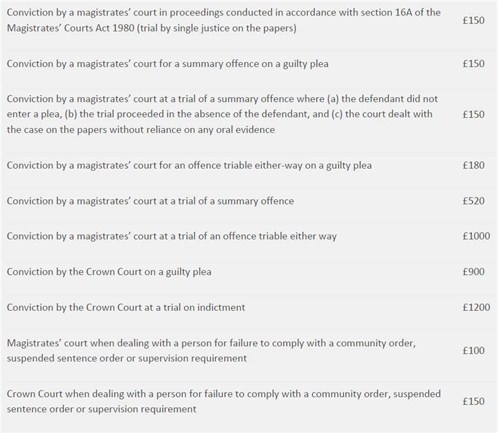 On consideration of the above table is justice now secondary to the financial position of the accused?

Clearly, when advice is given to people accused of a criminal offence the court charge will now be an additional point of consideration for people on a low income. It begs the question “is the right to justice too expensive”? Are defendants now under pressure to plead guilty through fear of costs escalating?

With funding for defence solicitors being cut by a further 8.5% in July this year, equating to a total fee cut of 17.5%, and legal aid becoming less accessible, how many unrepresented defendants will plead guilty through financial fear and as a result end up with a criminal conviction?

The aftermath of pleading “guilty” can have a devastating impact on daily life for instance difficulties in securing employment, travelling abroad or even renting property.

As a practicing criminal solicitor I have come across this problem on a daily basis. People accused of crimes are at risk of a “plea of convenience”, because they simply cannot afford the risk of an additional charge if found guilty.

In most cases, if the accused is found guilty the Crown Prosecution Service (CPS) will apply for full costs which can be in the region of £600 plus the courts fine, victim surcharge and now criminal court charge, which you can see in the above table, is very expensive.
Below is a practical example of the potential financial impact that would be incurred by those accused of a criminal offence and who have been convicted after trial.

The financial implications could be:

In this example, costs could spiral to £2,220, even before solicitor costs are considered! For those ineligible for legal aid they would also need to factor the additional fees for legal representation. These financial implications could have an overall impact on whether or not they can afford to pay a solicitor for their defence.

Due to the current climate, with regards to government cuts in legal aid, this has clearly made it more difficult for individuals to access justice and without proper legal representation there is greater risk to a person accused of a criminal offence to accept a “plea of convenience”, as they simply lack the funds to properly represent themselves at trial. Is a person in this very position getting justice? Or is this another obstacle put in place for proper consideration of the accused when facing a criminal charge?